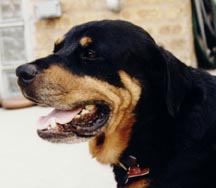 Until December 30, 1997, Jake was our Schutzhund star-in-the-making. He was showing every indication of making good on the promise of great working ability in his pedigree when an unfortunate accident put an end to his budding SchH career.

The accident caused him to lose his right front leg and any chance at earning his SchH titles. What he didn't lose was his love for life, his love of working, and his true rottweiler heart.

He's hardly slowed down at all... his ATTS TT and Canine Good Citizen were earned in the year following the accident. Sometimes when we watch him run and play in the yard, we hardly notice his missing leg. He doesn't let it bother him, so we don't let it bother us either.